Universality of the Theory 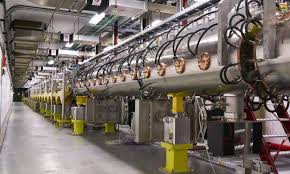 Nucleon has simple structure. It is considered that nucleons have complex structure and consist of mysterious "quarks". In Unified Тheory of Nature it is erected that the nucleon structure  is simple (Neutron star and The neutron formation see). By that the experimentally erected charge distribution on depth of a nucleon corresponds in the Unified Тheory to distribution of the cross component the travelling speed of a jet of ether (i.e. to the charge) of a microvortex on its frontal projection, i.e. on the projection corresponding to the direction of sounding of a nucleon by a translucent electron in experiment on a linac.

Proton and neutron spines are identical. It is known that a proton and a neutron have the identical spin, however, it is not known – why.

The Unified Тheory explains the gear of a birth of a proton and a neutron ("Neutron star" see above) from which follows that their spines (What is the charge? see) should be identical.

On the Unified Тheory the neutron star does not consist of neutrons. It consists of as much as possible dense ether, formed in the course of gyration of a star – "of wind" of jets of ether against each other (Stars and galaxies,  Closure of Universe and Explosions of galaxies and stars see).

Neutrons are only on the surface of a kern of a star, having occurbed as a result of explosion of the upper shell of a star ("Neutron star" see above).

Neutron decay. It is known that the free neutron breaks up to a proton, an electron and a neutrino. The cause of this phenomenon is unknown.

Зарегистрируйтесь чтобы оставлять комментарии!
You must register to post comments!